It’s November and a dream comes true: I made it to Myanmar! This post, however, is not about this country that I’ve been fascinated by, but the past few weeks I spent in Thailand. Hopefully on the next one I’ll be able to share some of my impressions on this intriguing place.

As mentioned previously, I was fortunate to spend my first two weeks with a Thai family, getting acclimatized to Thailand and learning the basics about Thai culture and food (so good!).

Since I left my adopted family in Phuket, I have visited a few places – but still far from seeing most of the country. When you travel for the sake of traveling, and don’t necessarily have to be in a specific location by a certain date, you allow yourself to spend longer periods of time here and there. You allow yourself to experience the local pace, its culture and atmosphere. That’s exactly what I’ve been trying to do, but I have to recognize it’s still not enough time to assimilate the local way of life – and I’m an obvious foreigner – farang – here.

With the exception of Ko Phi Phi – that I left after 2 nights – I felt like I could stay longer and longer on every other location I visited. Somehow, all the places exposed me to things that are important in my life, and that I’d like to do more often. Rationally I know it’s not a matter of place/location, I should be able to climb wherever I go, or meditate, or practice yoga, or avoid meat and alcohol; still it feels like certain places are more favorable than others to do so, and that’s something I’ve been trying to change during this journey.

The first place where I felt it in a powerful way was Tonsai, Railay, a climbing paradise where I reconnected with rock climbing and realized, once again, how climbing feeds my soul and energizes me. Even though I’m out of shape and my arms and legs can’t hold for long, even though I left with bruises all over my body, I felt complete, happy and fulfilled in a way climbing allows me to feel – and I had forgotten. 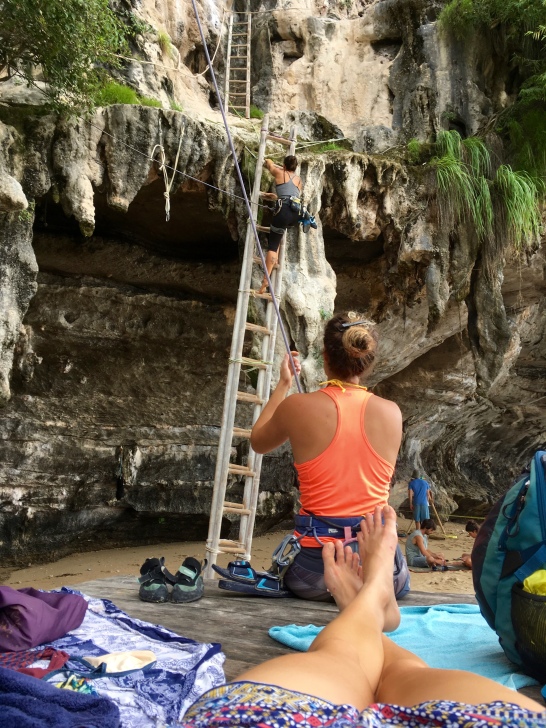 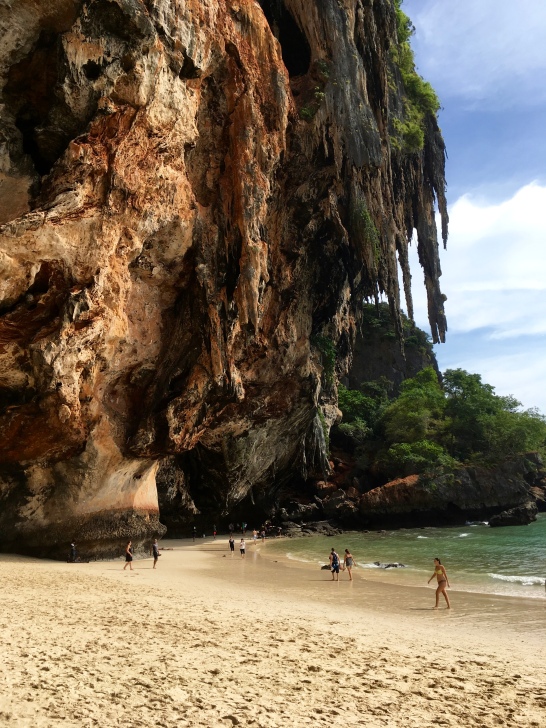 I also left this climbing paradise a bit in love. In love with the geology and rock formation. In love with the peaceful and calm vibe of the low and high tides. In love with the beautiful souls – some more than others 😉 – that I met there. If it wasn’t for one of the few ‘time and date’ plans I have during this trip – a meditation retreat in Ko Samui – I think I would still be in Tonsai. I could certainly go back. I’m probably going back.

The meditation retreat in Ko Samui started on the 20th. It consisted of almost 7 full days of silence, a 4:30am-9pm schedule, only 2 daily meals and tea, and sitting and walking meditation. As hard as it was to leave Tonsai I knew something pretty exciting was waiting for me. And I was right.

At the stage I am in the meditation world, it still involves a lot of uncertainty. I have no idea what kind of tricks my body and mind will play with me, where my mind will wander to, how to maintain the focus on my breath once it starts wandering. The experience of a week breathing, dreaming, walking, eating meditation was, to say the least, positively surprising. While trying to tame my thoughts and concentrate on the air coming in and out of my nose, my mind wandered to imaginable and unimaginable places. I had visions, I fell asleep during the sessions, I was bored, I was frustrated, I made lists of things to do, emails to write and people to call. I even wrote emails and postcards in my head.

But to my surprise the hardest part was not the silence or the mindful breathing. I pretty much enjoyed the challenge. The most difficult part was coming back to this loud and “real” world. It took me a few days to acclimatize again to people talking to me, to cars and motorbikes on the streets,  to so many food options. So the idea to head to Ko Phangan after the retreat was just perfect. A bungalow on the beach, an awesome Thai restaurant 5 minutes away, free yoga sessions every morning. Again I felt like I could stay there – in Haad Chao Pao – for a long, long time. But the other thing I had planned was a trip to Myanmar and it  was time to move and get closer to Bangkok, from where my flight to Yangon departed.

On my way to Tonsai I met a Brazilian girl who was also running away from Phi Phi. She joined me in the retreat and there we met a Russian guy – the yoga teacher – who followed us to Ko Phangan. The three of us ended up going to Ko Tao together, a small island known by the infinite offers of affordable diving courses – apparently it is one of the world’s cheapest places to learn how to dive.

Diving is still not my thing. Somehow I feel claustrophobic when wearing a mask and snorkel under water, I can’t even imagine a full scuba diving outfit. Maybe I’ll try it one day, but not yet. So when my travel buddies enrolled on a diving course I  decided to make my way to Bangkok and spend time with Namsai, do my laundry – yay! clean and dry clothes again! – and organize my things to finally enter the fascinating world of Myanmar.

Dealing with uncertainty as I go – Not only my itinerary is uncertain, unexpected things also happen as I go and I have to find ways to deal with them without getting (too) upset. So far – knock knock on wood – the main thing that happened, forcing me to re-plan and rethink my already tight travel budget, had to do with technology and connectivity.

The last thing you want when traveling on a budget is your computer AND your phone to die. Well, that was exactly my case. First the computer in Phuket. Puff! One day it did not turn on anymore. Diagnosis: mother board. Dead. Thankfully there’s Dropbox! 🙏🏼

Then my phone died after we were caught on a heavy rain in Ko Phangan, on our way to Bottle Beach – northern part of the island. No, it did not fall in the sea, or in the toilet, or in the pool – so I told the technician who stared at me skeptically. It was rain. And it was gone. Forever.

I had to decide if I’d buy a new computer + a new phone – which I ended up doing – and how I’d recover this money so I can keep my previous travel plans. I still don’t have an answer to the latter, but as life already showed me many times before, I’m sure things will work out. (by the way, if I can do any freelance to anyone out there, let me know!)

Rita holds two Masters degrees and is now determined to master the art of living uncertainty. Originally from Latin America, she lived in the US for 3 years, explored SE Asia for 8 months, spent most of 2018 in Africa, and made it back to SE Asia where she lives, for now... View all posts by Rita

One thought on “Breathing and living Thailand”

Reflections. Light within.
The land of smiles is also the land of sunsets.
Storming in Paradise.
Fire & Concrete
Light and darkness. Two halves of the same whole.
Playing with chrome and with my beloved Pentax k1000. Light sensor no longer works so the final result is always uncertain and surprising. What a nice surprise!
Blues, yellows, and wind #tocalmapiscessoul
Discovering new routes in known places. This was my main takeaway from my visit to my hometown, during this strange time. Not able to see the faces that I miss made me take new paths and rediscover the beautiful landscape that has always been there, but I haven’t noticed before. New routes, new eyes, same old ‘saudade’.
My stay in Mozambique was short but long enough to teach me lessons for life. Lessons about love, compassion, persistence, and RESILIENCE.