I made my way to Cambodia from Bangkok, where I met a friend who came to SE Asia to spend her vacation with me. We took a flight in BKK and landed in Siem Reap 50 minutes later (Nok Air, USD55). It’s possible to do it by bus or train, you just need to be aware of the visa and border-crossing scams at the border. More about Poipet famous’ scams here. Because we spent more time in Bangkok than previously planned[i], the flight seemed a better option for us.

Siem Reap is a lively city with its economy based on the tourism around Angkor Wat. It’s quite busy, but nothing compared to Bangkok. Despite being pretty touristy, it’s the #1 “must visit” place in Cambodia, and I’d add, in SE Asia. Lonely Planet features Angkor Wat as #1 travel destination, and most people go to Cambodia only because of the temples. That (temples, not LP) was also the main reason we wanted to visit Cambodia.

We spent 4 days there. First day was a rest day – to recover from all the walking around Bangkok and to plan our visit to the temples. The ticket is not cheap and there’s talk around town that it will increase significantly in 2017. In December 2016 it cost USD20/1day and USD40/3days. I don’t think 1 day is enough to see everything.

We visited most of the temples in Angkor complex + three others located 30-40km away from the city. We were speechless most of the time. Personally, I’m not sure if I found Bagan more impactful. The style is very different and I keep thinking whether it would change my impression if I had visited Angkor Wat first. I really don’t know. Still, there were moments where my jaw would literally drop.

Ta Phrom, for example, is magical. All those trees hugging the ruins in such a delicate way, as if they were put there at the same time. The silence… well, silence until the arrival of hordes of Chinese – IMPORTANT: get there as early as possible! And don’t stress too much about the Chinese. They do outnumber everyone else and stressing about their loudness, selfie-sticks, and lack of “simancol” won’t change the way they behave and will just ruin your day.

We chose to do the long circuit first (on our 2nd day) and leave the short circuit, which include Angkor Wat, for the following day. On the 3rd day we visit the Lady Temple, a tiny but extremely impressive building with incredible details everywhere you look. So delicate and so powerful at the same time. 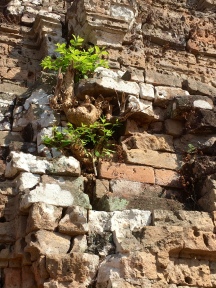 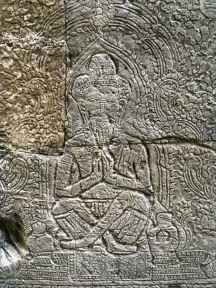 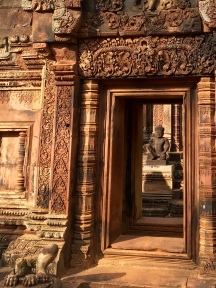 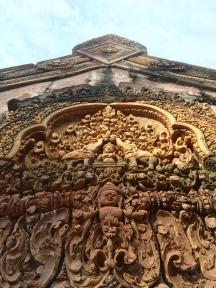 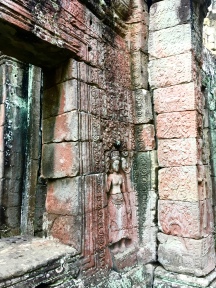 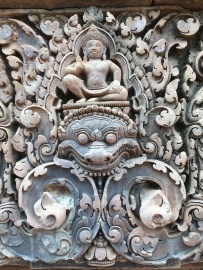 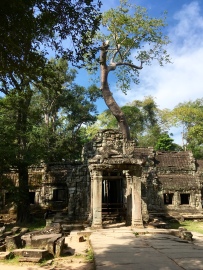 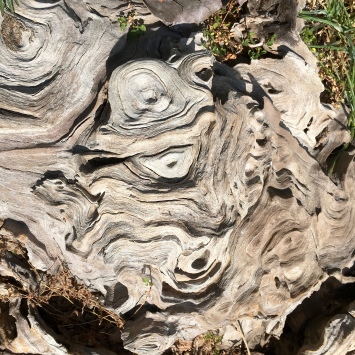 Siem Reap is definitely more expensive than other places in the country. If you get there from outside the country, you might have an impression that things are pretty cheap. Hold your consuming impulses though and buy your scarfs in Battambang or Phnom Penh instead.

You can visit the temples by bycicle, motorbike, tuk tuk, car/van/bus, but we didn’t even consider the latter. It’s a great feeling to feel the wind in your face while moving from one temple to another – and it’s also a nice way to recharge and get ready for more walking around ruins.

We found a nice tuk tuk driver and decided to stick with him during our stay. It was great. He had a really good vibe. He was so nice that – our mistake – we didn’t realize he was adding things to what was agreed and would charge for it later. So, as a piece of advice, you don’t need to change drivers if you like the first one, but don’t forget to agree on the price before you leave for the day and ask him over and over again if what he’s suggesting is included in the previous agreement. I know, I know, very basic thing, won’t happen again (so I hope).

Food: we rediscovered the meaning of “fresh fruit juice” with creamy and incredibly tasty smoothies for USD1. *** avocado + passionfruit is an awesome combination! I also loved Nom Krok, a rice-coconut pancake (gluten-free!) that you find everywhere.

Before heading to Phnom Penh, Cambodia’s capital, we decided to visit Battambang. Capitol Tours sells tickets for USD4.5 if you buy at their office (~1km from the old market). Hotels sell it for USD6-8. Important: call to confirm pick up from your hotel if you buy the ticket directly with the company. They “forgot” us and we heard it was not the first time it happened. Luckily our host called them and thanks to the delayed departure we were still able to catch it.

Battambang is the 2nd largest city in Cambodia but it feels like a small town in the countryside. It was founded in the 11th century by the Khmer empire.

It was a nice surprise after busy Siem Reap and before even busier Phnom Penh. In Battambang we rented a bike and rode along the river. Every kid in town would wave to us and say hello. When passing in front of a school where kids were going home we almost caused an accident because they’d look at us instead of at the traffic!

“Hello, bye-bye” was our motto in Battambamg.

From Battambang we took a bus (USD5) to Phnom Penh, the capital of Cambodia, situated on the Mekong River bank.

It was the first time we were shocked with the traffic and amount of motorcycles (it was certainly an anticipation to Ho Chi Minh/Saigon in Vietnam, but that’s another post…). It was also the first time we hated the place where we stayed and maybe it influenced the way we visited the city. Yes, there were better options but they were also more expensive; we just stayed out for as long as we could so we’d fall sleep as soon as possible.

The Royal Palace (USD6.50 > price will increase to USD10 in January 2017) deserves a visit according to Livia. I didn’t go inside but she loved – and I trust her, so you should go 🙂

On our last day in Phnom Penh we rented a bike and drove to Choeung Ek (USD6), a killing field during the Khmer Rouge regime, in the 1970s. It’s a very disturbing place. I felt a peaceful atmosphere in the area but then, listening to the stories of atrocities that happened there… it’s so sad to realize what the human being is capable of. It was the first place in Cambodia where I witnessed total silence among visitors (including the Chinese!).

From Phnom Penh we bought a bus ticket with Mekong Express to Ho Chi Minh, in Vietnam, for USD12. The trip took us about 7 hours.

It was a short visit to Cambodia and I’m sure there are many other interesting things to do there. What we could notice is that people are extremely friendly, food is similar to Thai food in many ways, and the Khmer culture is present everywhere we visited. For next time we’d love to visit the mountains and the coast. One more thing for next time… I guess I’m never leaving SE Asia 😉

PS-You can pay pretty much everything in American Dollars throughout Cambodia.

[i] Because I had to get my visa to Vietnam and thought that it would be easier at the Vietnamese Embassy in BKK – oh, make laugh! First I tried in Yangon, Myanmar, and they wanted to charge USD70 for the visa. I knew it should be cheaper so I tried BKK… but no. They wanted to charge me USD61. I ended up getting my visa in Siem Reap, Cambodia, through an agency recommended by the guesthouse where we stayed. I paid USD41 and got the visa on the same day. I had no problems getting into Vietnam with it.

Rita holds two Masters degrees and is now determined to master the art of living uncertainty. Originally from Latin America, she lived in the US for 3 years, explored SE Asia for 8 months, spent most of 2018 in Africa, and made it back to SE Asia where she lives, for now... View all posts by Rita