We arrived in Hanoi on Christmas Eve, on a full train coming from Ninh Binh. We spent the trip chatting with a smiley 9 years-old girl and her family. Everyone going to Hanoi for the weekend.

It was the first time since Livia joined me that we were not attacked by tuk tuk and taxi drivers on the way out of the train station. Point for Hanoi! From there we took a bus (more points to Hanoi!) and walked a few blocks to get to our hostel (Old Quarter View Hanoi), in the heart of the Old Quarter. All we needed after getting settled was to find a place to have our Christmas dinner and enjoy the French wine we bought in Hue.

It was interesting to see how the Vietnamese people use the public space on weekends. The streets around the lake were closed for cars and bikes, and were packed with people; mostly families with kids. They organize games such as tug of war, jumping rope, and crafts. In addition to the games, many Christmas decorations, lights and this song everywhere [play at your own risk] – even though only 8% of the population is Christian (Vietnam is one of the least religious countries in the world where 73% of the population declare themselves irreligious).

In Hanoi we visited the Hoa Lo Prison, also known as Hanoi Hilton by the American prisoners kept there during the Vietnam War. And we tried to visit the Ho Chi Ming Museum and the Citadel. “Tried” because we picked the wrong days to go to each of them. Sunday and Monday respectively. They were closed. (If you go to Hanoi, go to the Citadel on Sunday and vice-versa). 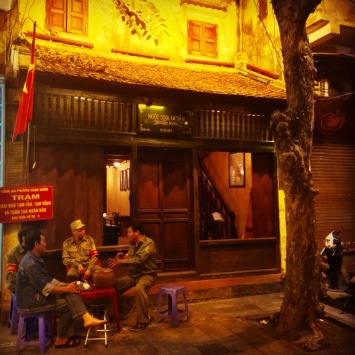 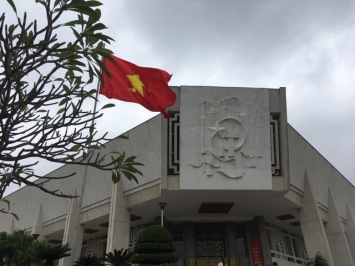 Also in Hanoi I saw a friend who I met in 2010, in Berkeley, CA. I remembered Dang as this funny guy who thought us a funny warm up exercise to keep us awake throughout the day, despite all the party from the night before. He picked us up at the hostel and took us out for dinner. “No snakes, Dang, I’m not ready for that”, “Chicken, then”. And this is how we tried the traditional black chicken from Vietnam. We were skeptical at first, but pretty amazed by the taste after we tried (until I found the chicken’s head in my bowl and had to covered it to continue eating. Still: delicious). Dang also took is for a coffee with view to the lake we had circled a couple of times. We laughed a lot and had a great time with the Vietnamese hospitality. Thank you Dang!

On December 27th Livia left and I took a bus to Cat Ba island [200K VND], northeast of Hanoi. No goodbyes because neither of us like goodbyes; but also because I didn’t want to think how my next days would be without her. I’d be traveling alone after a month.

I ended up in Cat Ba for a few reasons; rock climbing one of the (i.e. the great time I spent in Tonsai, Railay). There I stayed at Mr. Zoom’s (5 USD room with private bathroom), who also owns Cat Ba Climbing.

View from the top, Cat Ba

On the way to Halong

Climbing shoes on a boat?

The island is a great place to take a break from the busy Hanoi or the touristy Hoi An. And it was all I was looking for: sea, mountain, rock climbing, nice people, and the best Pho Bo I had in Southeast Asia. At first I thought I’d stay 3-4 days there, and ended up staying 6 days, and celebrating the New Year playing pebolim with a group of Italian, Dutch, Mozambican, German, and a Brazilian from Sao Paulo who knows people from the climbing gym I used to go to.

In Cat Ba, I strongly recommend rock climbing. Talk to Mr. Zoom or the super helpful people from Asia Outdoors, and ask about the climbing areas (an entrance fee is charged) and/or deep water soloing (DWS). Take a boat trip too (14USD) – unless you go DWS, because you kind of see the same things – and get the impressive and scenic landscape of Vietnam take your breath away. You can also hike to a view point, on the way to hidden valley, where you have an amazing 360 degrees view of the island.

After staying almost a week and starting the new year surrounded by the sea (literally) and good people, I took a bus to Hai Phong (140K VND) and from there to Cao Bang (260K VND) This time with another travel partner: the Brazilian of Japanese descent.

I’m not really sure how we chose Cao Bang. We had no idea what we would do there, but we went anyways. The bus dropped us off at 4am and we walked about 2km to the hostel owned by a lovely Vietnamese family who, despite not speaking English, were great hosts. It was the first time in Vietnam when I felt like “the different” one, mainly because of my height – and traveling with a Brazilian Japanese doesn’t make me less tall.

We walked around town, enjoyed great Vietnamese coffee, and rented a bike to visit Bang Gioc, a waterfall (40K VND) located at the border with China. As in Cat Ba, my breath was taken away by the scenic limestone formations, this time joined by winding roads and rice fields.

Bang Gioc waterfall and China across the river

From Cao Bang we started a bus adventure to Ha Giang. We left on a van at 5:30 am and arrived 12 hours later, changing to a mini-bus in Bao Lam (120K + 80K VND). The roads were bad because of the rain. Still worth it.

Ha Giang was my alternative destination to Sa Pa, where most of the tourism in Northern Vietnam is, and I was happy with the decision to go there instead. We stayed at Kiki’s House Hostel where we also rented a bike. There I finally completed my process of falling in love with Northern Vietnam. 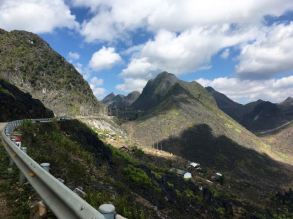 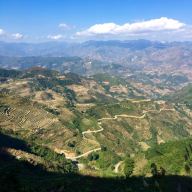 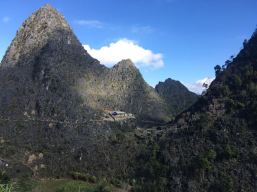 A house in the mountain

I can’t find words while writing here to express the beauty of the Ha Giang loop. The mountains, valleys, colors, people, rice fields, roads. Just: astonishing. And cold, so take your winter jacket and/or windproof with you.

Must see/visit in the Ha Giang loop:

Lung Cu – the most northern point in Vietnam, from where you can see China!

Street Market. I was there on the weekend and went to two Sunday markets (in Dong Van and Meo Vac). It is nice to see the people on their best clothes, carrying their best products ranging from rice to cattle, from corn to huge pigs. Women wearing very colorful outfits, while men were mainly wearing black. 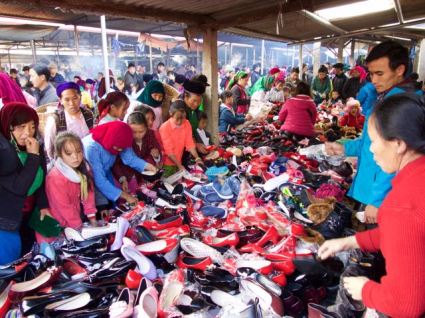 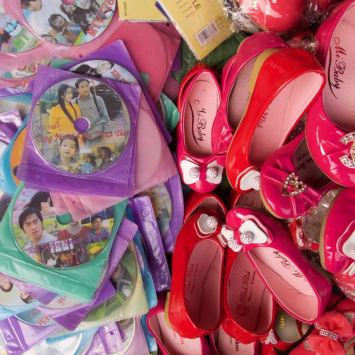 We were lucky that in the only moment we were hesitant to take a right or left, a local guide told us to follow him. We took the left then.[1] We then took a newly open road through the valley, with spectacular views of the mountains playing hide and seek with the sun.

Back in Ha Giang we took a day off before moving towards Laos, where I fell in love. My Vietnam visa was going to expire in 2 days and I didn’t want to risk dealing with the officials at the border. At 5:30 am we got on a mini-bus to Lao Cai (130K VND, arrives at noon). From there another bus at 5:30pm to Dien Bien (215K VND), and from there 6am to Muang Khua (120K VND in Laos.

Rita holds two Masters degrees and is now determined to master the art of living uncertainty. Originally from Latin America, she lived in the US for 3 years, explored SE Asia for 8 months, spent most of 2018 in Africa, and made it back to SE Asia where, for now, she finally feels home. View all posts by Rita

One thought on “Travel notes – Vietnam”

Light and darkness. Two halves of the same whole.
Playing with chrome and with my beloved Pentax k1000. Light sensor no longer works so the final result is always uncertain and surprising. What a nice surprise!
Blues, yellows, and wind #tocalmapiscessoul
Discovering new routes in known places. This was my main takeaway from my visit to my hometown, during this strange time. Not able to see the faces that I miss made me take new paths and rediscover the beautiful landscape that has always been there, but I haven’t noticed before. New routes, new eyes, same old ‘saudade’.
My stay in Mozambique was short but long enough to teach me lessons for life. Lessons about love, compassion, persistence, and RESILIENCE.
Mozambique blues, and yellows and sunsets.
Don’t be fooled by beautiful blue skies and cotton-like clouds. There’s a country fading and cracking in the hands of a president who couldn’t care less.
My temporary homes, past memories and instructions for the future, and I.
2020 colors.